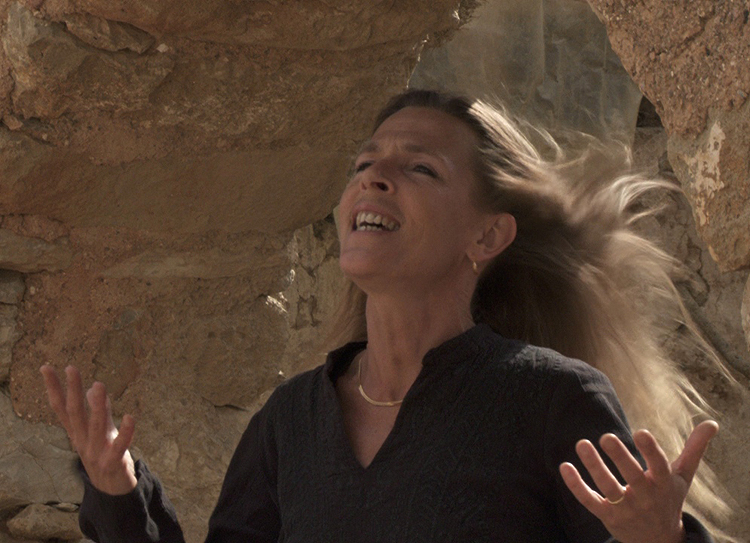 LETTERS TO A YOUNG SINGER is filmed in the Cretan mountains in Greece, where Lena Måndotter lived for many years. Its a film about song, psyche, soul and body and its transpersonal dimensions. Its a journey into myths and dreams with the intention to heal and protect what can be called sacred.

The film LETTERS TO A YOUNG SINGER clearly shows Lena Måndotter’s deep understanding of the connection between song and psyche and the body-soul work. Lena is a singer, song-therapist, writer and film-maker and the depth of the movie is shown in the original and convincing way she uses the images! People who watch this movie will be moved at a deep level and even if they don’t understand everything with their heads; their bodies will definitely understand”
MARION WOODMAN, Jungian analyst based in London/Ontario, Canada, and internationally known writer, lecturer and seminar-leader.

"A series of photographies fram the Cretan mountains, taken from the filming of LETTERS TO A YOUNG SINGER (part one). Some of the film clips made it into the film. Some just made it into my heart and I keep them as treasures in my memory”.
LENA MÅNDOTTER

The film LETTERS TO A YOUNG SINGER (part one) had its premier at one of Sweden's most known filmfestivals - Båstads Filmfestival in 2009. Since then the film has been screened at many venues; for example Skånska Filmdagarna and Ifema Filmfestival in Malmö (Sweden), IAVMT conference in Graz (Austria), Spirit Filmfestival in Paris, ISAP in Zürich (Switzerland), Culture Unplugged and Kulturhuset in Copenhagen (Denmark) and many more venues. Lena Måndotter also often screens the film in her seminars about the psychology of song. (see Song Workshop Page) Please send us a mail if you are interested in screening the film or arrange a film seminar.

Letters to a young singer can be orderd below. 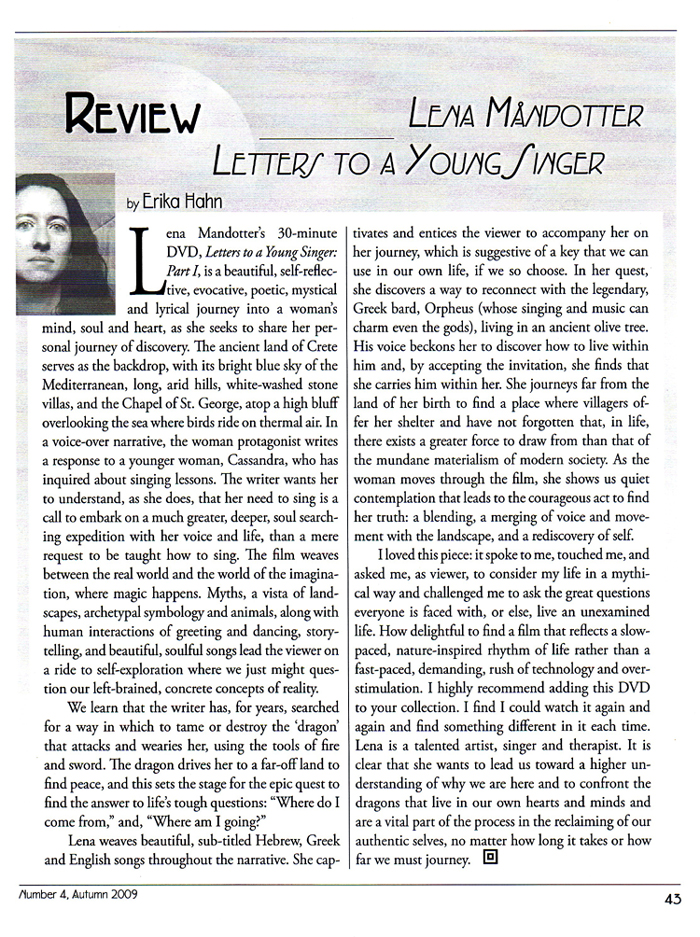 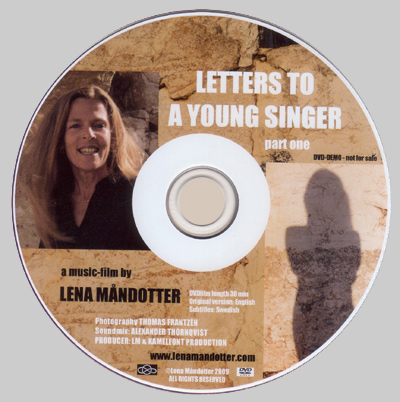 For outside Europe including post and packaging total: 165 SEK

Pay safe by any credit card, and you
do not need to register a PayPal account

LETTERS TO A YOUNG SINGER, part 2
We have begun the pre-production of the film "Letters to a Young Singer", part 2. The film-crew has been Lena Måndotter, cello-player Åsa Gjerstad, film-photographer Thomas Frantzén and creative consultant Ronnie Hall. We now have a short film of 12 minutes ready and plan to continue creating the film this summer. Please sign up for our mail list if you want to stay updated info (@) lenamandotter.com
Our initial creative work with the new film project has received kind support from The Savings Bank Foundation Skåne and The Norma G Canner Foundation, USA.

Lena Måndotter's vision is to continue creating six more films in the film-serie Letters to a Young singer - a film about song and psyche. The intent with these films is to show how music and song can heal our bodies and souls and increase our health.
You are welcome to support the following films and you can do it here by a donation through PayPal. All sponsors and donators will be listed on this page and in the films unless other is required.